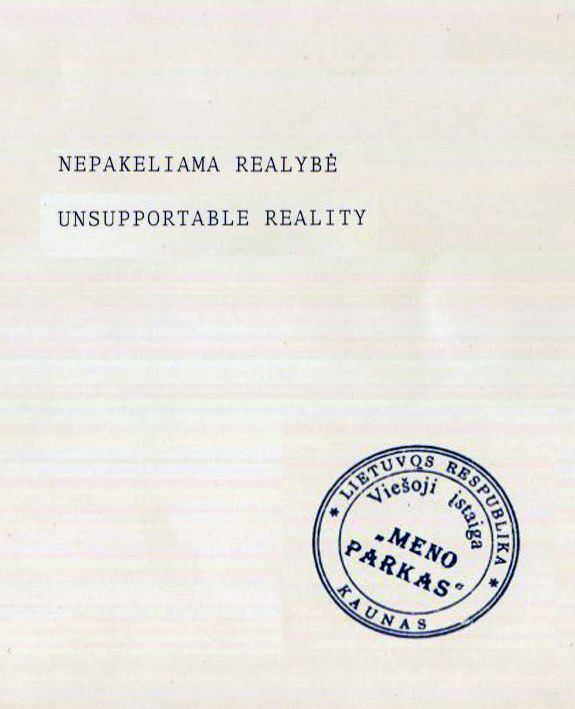 THE CRUMBS OF REALITY

falling into decline. The epoch of relativity is gradually deprived of the dimension of truth. It seems that the former metaphysical knowledge of one original and its multiple copies is being replaced by another theory of inhomogeneous things that suddenly appear to have became twins – they can neither be identified nor called the original and the copy. These things are no longer examinable, reliable and identifiable.

The disappearing authenticity in art echoes in our dayly experience: the unsupportable truth of our life shows that irritating and disturbing events no longer take place in the person himself but rather somewhere alongside. There are „others“ who experience „unreal“ defeats or victories,“unreal’ pain or pleasure.

The main problem is not that of a display of one’s self (which actually cannot be defined]; rather it is a problem of painful conflict with the unsupportable reality – with the reality that has become unreal.

One might wonder wheather it is still possible to play a childish game coming from the fairytales where one would give himself a pich on a hand to check if he is not dreaming, to make everything return to their places – become real and identifiable again. Is only a painful experience able to touch the surface of the reality? It would seem that causing oneself pain on purpose is the only possible way to return to the real world and the real body.“

One might say these questions are too broad to be answered: however, since the romantic time of the Romantics the idea of the single possible answer has been refused, and any answer has been easily exchanged into interesting, although subjective, self analysis.

„Unsupportable Reality“ is no horrible theme since so many artists, eager to develop it, have gathered arround it. Rather it is a paradoxical fulcrum one would use as a departure point to move somewhere. It is paradoxical while it is pleasantly scaring, yet at the same time this state is dynamic, lasting only for a while.

Not all of the works are passionate or providing with the feeling of a miracle. Let us say they are exhibited here for a number of reasons that can be called ’socratic‘. Firstly, the authors are showing interest in the creatures they are best ac­quainted with, i.e. themselves: their efforts in doing so are „absolutely“ successful/unsuccessful. Secondly, as these creatures surpass the common understanding, the authors have employed the mass of the extreme means of expression: they did this hotheadedly, ironically, frighteningly, shrewdly and ruthlessly.

Should one do something what would – at least for a few moments – remain ‚impossible‘?